Never Drink the Water from Your Nightstand- Here is the Reason

Knowing the importance of water, many people leave a glass of water on their nightstand before going to bed in case they should wake up during the night feeling thirsty. And, all of you who have done this or do it regularly will know the strange taste this water has in the morning.

Regular water unlike food doesn’t contain sugars or proteins that microbes thrive on. So we can’t say that it’s microbes that account for its strange taste. 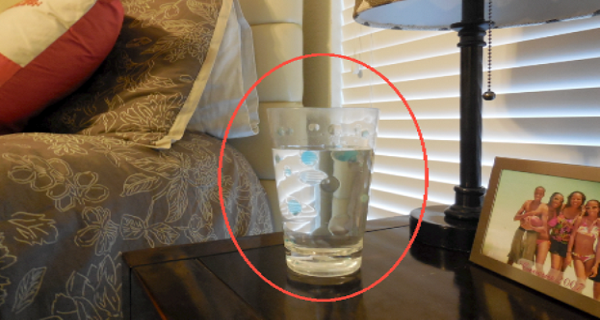 On the other hand, water left in a glass is more susceptible to dust particles and air-borne bacteria.

On the other hand, when water is exposed to air, it absorbs carbon dioxide, a small part of which is converted into carbonic acid. In other words, this implies that water exposed to air is prone to changing its chemical structure. To be more specific, carbon acid converts into carbonate or bicarbonate when it releases one or two protons, which in turn changes the water pH. This change also affects its taste.

Although this doesn’t necessarily mean that water that’s been on your nightstand all night is harmful to drink, it’s definitely something worth considering due to the fact that this water has collected a lot of dust and air-borne bacteria. So, the next you feel thirsty upon waking up, simply hop to your kitchen and get some fresh water instead.