The numbers of plastic bottles that are being sold on daily basis are tremendous. Around 2 million bottles are bought every five minutes around the world and every 6 hours, around 1 million plastic cups are used in airline flights in the United States. These numbers make this type of plastic the most consumed product in the world. But when we come across the results from some new researches on the quality features of this plastic and its effect on our health, we realize that we have a problem with this product. These researches show that plastics are slowly killing people without them knowing. 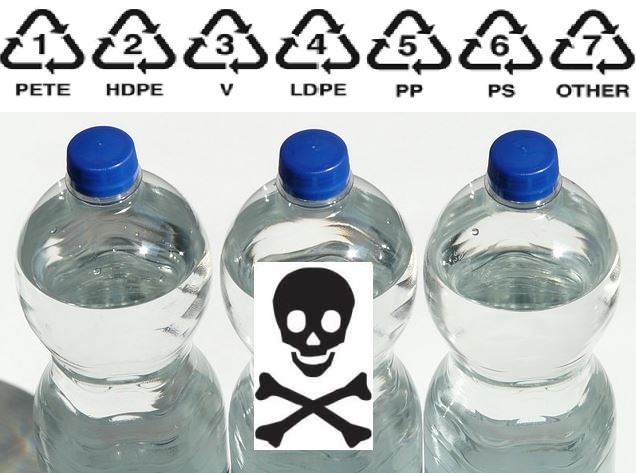 For many years, it was believed that bottled water is better than tap water because it contained vitamins, and in reality it is the tap water that is put in plastic bottles, making it an environmentally unfriendly hydration source. Because the plastic bottles are classified as enemies to humans, it is necessary that you look at the bottom of the bottle ad look for a symbol before you use the product.
SYMBOLS AND THEIR MEANING

At the bottom of the bottle, you will look for a triangle with a number, which can be form one to seven. These numbers tells you whether the product is safe for use or not. Let’s go through the numbers and their meanings:
#1 If you find triangle with number 1, the bottle is known as PET or PETE. It can be used only once and shouldn’t be reused because it can emit antimony, a heavy metal which can interfere with hormones in the body and can be even be carcinogenic.
#2 If you find triangle with number 2, the bottle is known as HDPE or HDP. This product is considered to be made out of good plastic and doesn’t have as much emission as the other types of chemicals used in the other bottles when I contact with water.
#3 V or PVC plastic has number 3. It has two toxic chemicals that can influence the hormones in the body. But still, PVC is commonly used type of plastic nowadays.
#4 The bottle is known as LDPE. This is also good plastic and most often used in water bottles and plastic bags. They don’t emit chemicals when used in water bottles.
#5 on the bottom of the bottle marks is as safe to use. Their white color makes them recognizable, but they can be transparent, as well. The plastic is known as PP, used in the production of yogurt cups and syrup bottles.
#6 plastic is used in fast food packaging and in coffee cups even though it is known to be carcinogenic because it emits STIREN.
#7 is known as PC plastic. You should avoid using these bottles because the plastic emits BPA, a very harmful chemical. Unfortunately, PC plastics are commonly used in containers for food, sports drink bottles and infant bottles.
To sum up, you can continue using bottles that are labeled with numbers 2, 4 or 5. We strongly recommend that you avoid using bottles marked with 1, 3, 6 or 7, because you will be exposing yourself to the dangerous chemicals that these plastics emit.
Source
Share on Facebook
What Do You Think ? Add a Comment...
Posted by Unknown at 8:44 PM
Email ThisBlogThis!Share to TwitterShare to Facebook
Newer Post Older Post