It wasn’t exactly just discovered, but the Draco Volans, a tiny lizard that looks stunningly like a dragon, has been discovered in Indonesia. It’s not a dragon since, you know, dragons don’t exist, but they are an incredible animal. They’ve developed the ability to fly in order to avoid predators. 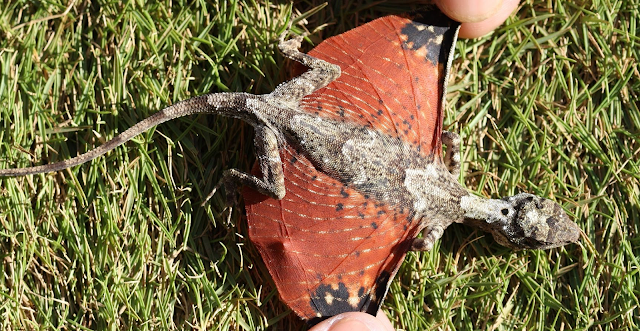 Each lizard has a wing-like appendage that allows them to soar from tree to tree, enabling them quick escapes when needed. It also helps them catch delicious insects and and attract mates. They are able to fly about 30 feet with a single leap. Pretty impressive.

Where birds have wings covered in feathers, the Draco Volans has an elongated ribcage that they can extend and retract when needed. Draco Volans only reach about 8 inches in length, so don’t expect it to go all Trogdor and burn down some feudal villages any time soon. They also don’t breathe fire. That aside, they are very territorial. Their territories include usually about 3 trees and they will fight off any other little dragon who tries to encroach.

The female dracos guard their eggs after laying them in the ground for about 24 hours. After that, the kids are on their own.