She Gave Him Pizza Thinking He Was Homeless, But Pay Close Attention… Do You Recognize Him?

There are a lot of homeless people in the world, but luckily there’s are also a lot of amazing and giving people who are willing to help out. One lady in particular Karine Gombeau from Paris, France is one of these amazing people. She tried to help someone out but something completely unexpected happened. She was in Grand Central in Manhattan when she spotted a homeless man looking for food inside a garbage bin. Being the amazing and kind-hearted person she is, she decided to help this man out. She had just been out for pizza with her family and had bought an extra large pizza, so she decided to give it to this man. She even apologized for the pizza being cold. 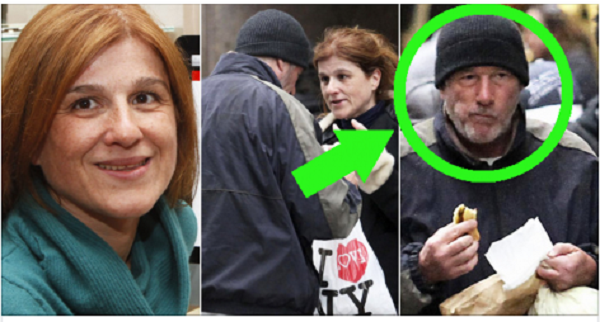 A few days later, at her hotel, a lady came running up to her with a newspaper. She was very surprised to see her her picture in there along with a story. She quickly discovered that the homeless man she had given the pizza to was actually Richard Gere! He had been filming a movie in Grand Central Station when she mistakenly walked on set and mistook him for a homeless person! What an incredible story!

Karine Gombeau, a 42 year old woman from Paris, France was on vacation in New York. She saw a homeless man looking for food in a garbage in Grand Central Station. Being the kind-hearted soul she is, she decided to give this man the extra-large pizza she had left over from lunch with her family. She even apologized that the pizza was cold! Days later, a lady at her hotel a lady gave her the newspaper and she discovered that the homeless man she had given the pizza to was actually Richard Gere! He had been filming a movie and she had stumbled onto the set! What an incredible story! Richard was very moved by this gesture so the story ended up on the newspaper!