Kid's Response To His Angry Boss Is Perfect

Everyone usually has a hard first day at a new job, and it's no different for the kid in this fun fictitious story.  When his manager comes to check on him after his first day, he is disappointed by the number of people the kid has made sales to.  Check out the story to see how the kid replies to his boss's outburst.

A young guy from North Dakota moves to Florida and goes to a big "everything under one roof" department store looking for a job.

The manager says, "Do you have any sales experience?" 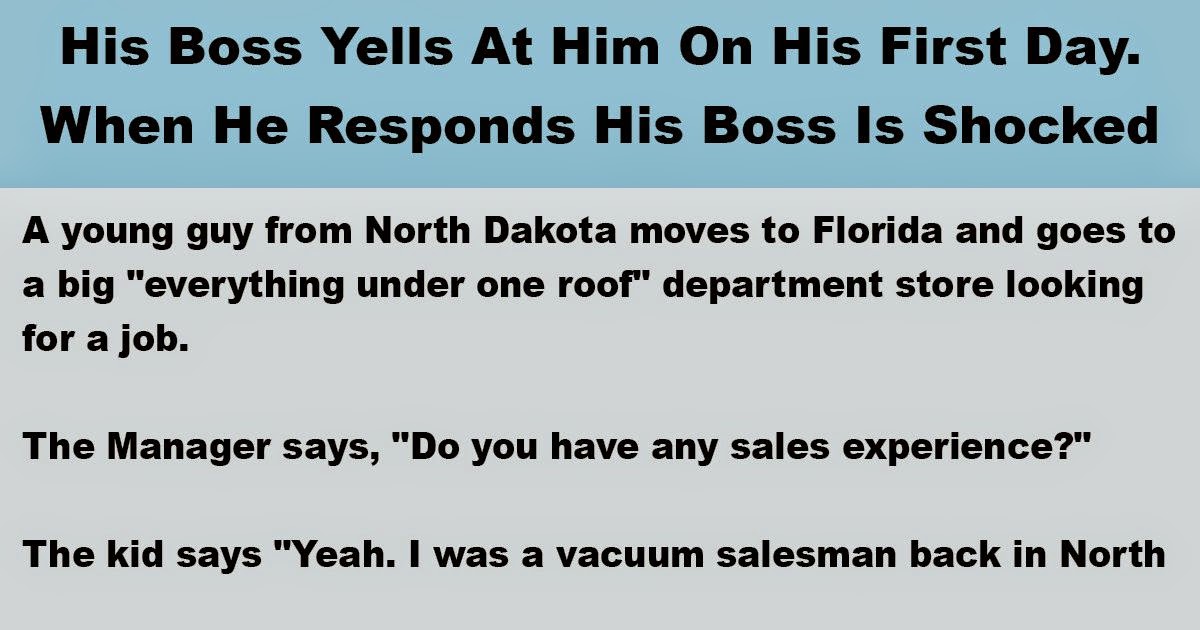 The kid says, "Yeah. I was a vacuum salesman back in North Dakota."

The manager was unsure, but he liked the kid and figured he'd give him a shot, so he gave him the job.  "You start tomorrow. I'll come down after we close and see how you did."

His first day on the job was rough, but he got through it. After the store was locked up, the manager came down to the sales floor to check on how the kid did on his first day.  "How many customers bought something from you today?"

The kid frowns and looks at the floor and mutters, "One".

The manager replies, "Just one?!!? Our employees average sales to 20 to 30 customers a day.  That will have to change and soon if you'd like to continue your employment here. We have very strict standards for our sales force here in Florida. One sale a day might have been acceptable in North Dakota, but you're not on the farm anymore, son."

The kid took his beating, but continued to look at his shoes. The manager felt kind of bad for chewing him out on his first day. He asked (semi-sarcastically), "So, how much was your one sale for?"

The kid says, "Well, first, I sold him some new fish hooks. Then, I sold him a new fishing rod to go with his new hooks. Then, I asked him where he was going fishing and he said down the coast, so I told him he was going to need a boat. We went down to the boat department, and I sold him a twin engine Chris Craft. Then he said he didn't think his Honda Civic would pull it, so I took him down to the automotive department and sold him that 4x4 Expedition."

The manager said "A guy came in here to buy a fish hook, and you sold him a boat and a TRUCK!?"

The kid said, "No, the guy came in here to buy tampons for his wife, and I said, 'Dude, your weekend's shot, you should go fishing.'"
Source
Share on Facebook
What Do You Think ? Add a Comment...
Posted by Unknown at 7:31 PM
Email ThisBlogThis!Share to TwitterShare to Facebook
Labels: life
Newer Post Older Post