Dolphins Form Forcefield Around Marathon Swimmer, Protecting Him From A Vicious Shark (Video)

British competitive swimmer Adam Walker was swimming through New Zealand waters last Tuesday when he noticed a 7-foot shark directly beneath him. 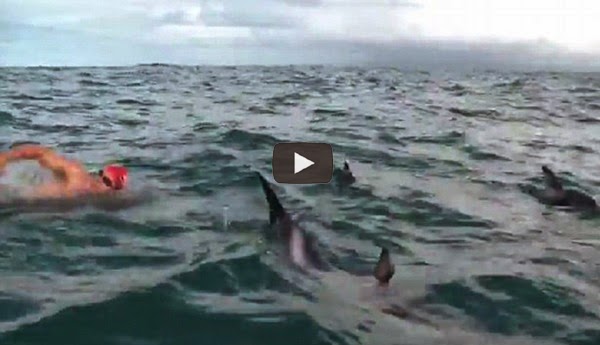 The creature decided not to attack, however, after approximately 10 dolphins surrounded Walker, swimming right along with him for over an hour.
They came so close at a few points that Walker remembered feeling their tails brushing his body.
It’s not clear whether the dolphins joined Walker to protect him or just to play, but he is undeniably grateful for their company.


“It would be a nice thought they were thinking, we will just help our pal get through,” Walker told a New Zealand website,according to Daily Mail.

It’s not so farfetched that they would come to his aid since dolphins have been known to attack sharks to defend their young and even human beings.
Daily Mail reports that British lifeguard Rob Howes, his daughter and two of her friends were saved by a group of dolphins when they came face to face with a great white in 2004.
The shark was reportedly just a few feet away when the dolphins circled the four swimmers, standing their ground for 40 minutes and driving the shark away.
Walker was participating in the sixth stage of the Ocean’s Seven challenge, a series of journeys over what are considered to be the seven most taxing routes in the world.

“I’d like to think they were protecting me and guiding me home!!!” he wrote on his Facebook page of the dolphins.

This wasn’t his first brush with dangerous fish, as Walker was stung by a Portuguese man o’ war jellyfish in Hawaii.

“I lost feeling in my spine for about five minutes, and then I just had to push through it,” he said.

After successfully swimming the Cook Strait in just over eight hours, Walker will move on to the Ocean Seven’s final stage: the Irish Channel, located between Ireland and Scotland.
If he completes the unbelievably rigorous swim, Walker will have become the first British man to do so.
H/T: Daily Mail, Photo Courtesy: Twitter
Share on Facebook
What Do You Think ? Add a Comment...
Posted by Unknown at 12:05 AM
Email ThisBlogThis!Share to TwitterShare to Facebook
Labels: life, media
Newer Post Older Post